You'll Miss Me When I'm Gone by Rachel Lynn Solomon
My rating: 5 of 5 stars

This book was everything I hoped it would be (and more). Written from alternating POVs of twins Adina and Tovah, YOU'LL MISS ME WHEN I'M GONE follows the growing emotional distance between the two sisters as they are tested for Huntington's, the degenerative disease slowly killing their mother. One twin tests negative, the other tests positive. And from there, everything changes.

The first 75 pages of this book (the lead-up to the test and diagnosis) drained me emotionally because I immediately became attached to both Adina and Tovah. Adina plays the viola and is auditioning for conservatories, while Tovah has been striving for admission to Johns Hopkins with the goal of becoming a surgeon. Adina is rebellious and has fallen away from her family's Jewish faith after her mother's diagnosis, while Tovah keeps kosher and relies heavily on her faith. Both girls are ambitious and flawed. They don't fit neatly into stereotype boxes (my review doesn't do justice at describing how fully fleshed out they are), and I adored them both. Their voices are distinct and strong in first person POV - even if the chapters hadn't been labeled with the narrator's name, I would still know who was speaking.

This is a sister story. A family story. A coming-of-age story. It is not a medical drama where the disease is the star and the characters are its victims. This is a book about people and the choices they make, the things they want. Loved, loved, LOVED this one.

View all my reviews
Posted by Kaitlin Bartlett at 10:59 AM 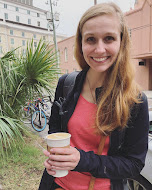 Hi there! I'm Kaitlin. I write contemporary YA fiction and love talking about books. I drink coffee like a Gilmore girl. Other loves include Hamilton, French toast, yoga, and travel.